I love climbing, physics, coffee, my family, my friends, climbers, cake, chocolate, baking, eating the baking, and running and (depending on whether they eat the wrong things) I love our two cats; Poppy and Lola. 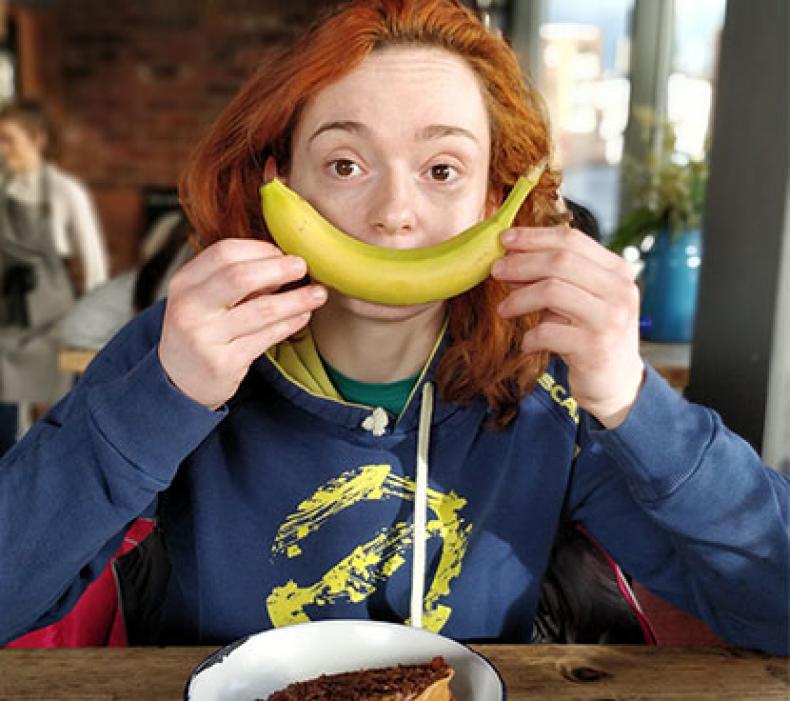 My non-climbing time is spent on my PhD (which in turn is split between the University of Sheffield and the Advanced Manufacturing Research Centre). I typically either work 8-5, or 9-5, depending on whether I have machining trials taking place at the AMRC.

My biggest time battle is definitely between my job and climbing. If push comes to shove and I feel that the PhD needs more work, I usually cut the climbing down a bit and add in a few evenings/the odd weekend day.

In the winter, I definitely struggle with training after a day of work. I’m both amazed and jealous if anyone doesn’t; it’s dark, I’m usually a bit sleep-deprived (or a lot if I’m running trials) and it feels that life becomes somewhat “bam-bam-bam and onto the next thing”.

I’m generally a sociable creature and I train at the Foundry in Sheffield; partly for the convenience of the location and mostly because the people there are absolutely awesome.

I’ve been climbing for 8 years now, since I was 18, and I’ve been training with Lattice for about four of those. I started training with Tom Randall just before my third (and final) year of university, a week before badly fracturing my tibia and fibula in a dyno-related accident at the Depot in Leeds. To Tom’s credit, he very kindly re-wrote my plan to involve finger training, pull-ups and not much else and I spent the following 8 months finger boarding.

It was a low point in my climbing, motivationally, and it took about 2 years to physically get over the accident and I’m finally, four years later, getting to the point where I feel I’ve recovered from the mental effects of the injury.

When I could climb again, I climbed Supercool, an 8a+ sport route at Goredale, which at the time was the hardest thing I’d climbed. I suppose I’d call myself a route climber, really – but over the last year or so I’ve started training for strength, and bouldering a lot more. I’m good at not letting go, rather than pulling hard moves and I want to re-address that balance.

I’m currently looking forward to a trip to Font in four week's time. It’ll be good to have a week out from both climbing and life in general, and I’m hoping that I’ll be able to get my teeth stuck into a few things there (other than pastries).

The result is that I either feel amazingly efficient or terrible at everything!

I started the day with Crunchy Nut cereal with chocolate curls. Bad I know. I normally don’t buy these because I know adults aren’t supposed to eat crap for breakfast.  I also eat peanut butter on toast regularly, that’s as healthy as it gets (protein right?).

I’m writing this while the students I’m teaching for project week are working on their projects. I feel a tiny bit guilty that I’m not working on my PhD. I tend to feel like I’m never doing enough or committing properly to anything. Climbing and my PhD are both hugely important to me but they are incomparable in terms of ranking them. I couldn’t live without climbing, but then I couldn’t be happy without science (OK, engineering). The result is that I either feel amazingly efficient or terrible at everything!

I looked at the plan from Lattice this morning and picked four things that I can fit in tonight. I used to plan ahead at the start of the week but I’ve either got lazier or busier, and I end up doing it at the start of the day/two days most of the time.

Motivation was low before training. Monday is always the first day on and it’s a long, long way until Friday. I finger boarded and then did some power work on the Moon board where I enjoyed some school playground bullying for having a brick phone...more on that later. I also ate a Crème Egg brownie. What can I say? January is not the month for dieting.

I got home about 9:30pm and hung out with Poppy for a bit. Well, Lola. Poppy did her own thing. Lola spent the evening trying to eat some dried flowers.

On the Moon board. 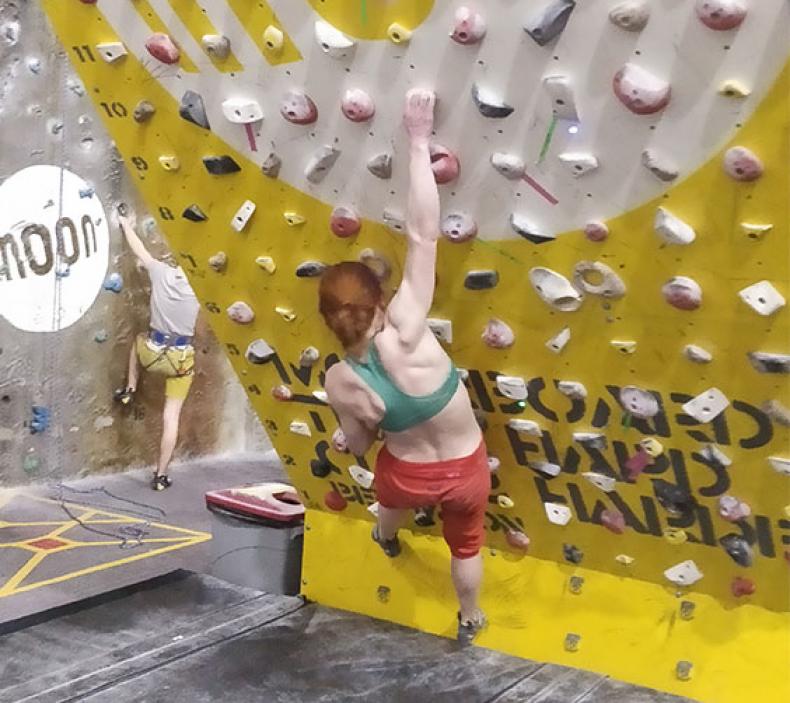 I woke up and wanted to fuel my smartphone addiction with some early morning screen time. However, I’ve decided to give it up for 28 days and am living an impoverished life with a brick phone. As predicted I am definitely over-reliant on smart phone technology.

I’m feeling psyched for training tonight: it’s a projecting session which means getting on the overhanging bouldering wall (the Wave) and getting strong. I’m even making an effort not to eat cake today and have hard boiled eggs for a pre-training snack.

Training was a disappointment. After yesterday’s finger boarding my finger joints felt a bit sore and it became quickly apparent that climbing was not going to work out. I’m not actually that used to finger pain, being someone who is more inclined to shoulder injuries.

I was pretty grumpy about it, and spent 45 minutes pouting before I finally did some conditioning. Pull ups, and core. I’m supposed to do 25 press ups for the core and I get to my limit (which is <25) and then end up trying to finish with my knees on the ground, totally ruined! I also ditched the healthy eating in favour of consolation chocolate.

I think perhaps I worry too much.

It has to be said that I dreamed about a smart phone last night. Only briefly, but that’s pretty tragic.

The students were lacking enthusiasm this morning and have declared that they don’t fancy the 9-5 life. I’ve tried to bribe them with my biscuit-based “innovation station” and won them round. It’s pretty inspiring seeing how motivated the undergraduates are.

I managed to overcome my 5pm inertia and started producing a paper draft after teaching today which I’m pleased with. It’s been nagging at the back of my mind increasingly over the last few days.  I’m struggling to juggle things without the constant access to Google calendar by my side.

For someone who considers herself to be logically minded, I find it incredibly difficult to apply that to the organisation of my life which generally results in a constant feeling of chaos. I think perhaps I worry too much.

In other news, I’ve signed up to Rotherham’s Cycle Hub scheme to borrow an electric bike for commuting to the AMRC. It’s far enough and hilly enough that I don’t really have the wherewithal to do it every day even if I wasn’t a fair-weather cyclist.  I’ve been allocated a bike to borrow for the next three months. I’m very excited! Photos will follow.

This evening’s plan is to chill out in front of a fire with Lola and Poppy (and Alistair of course). 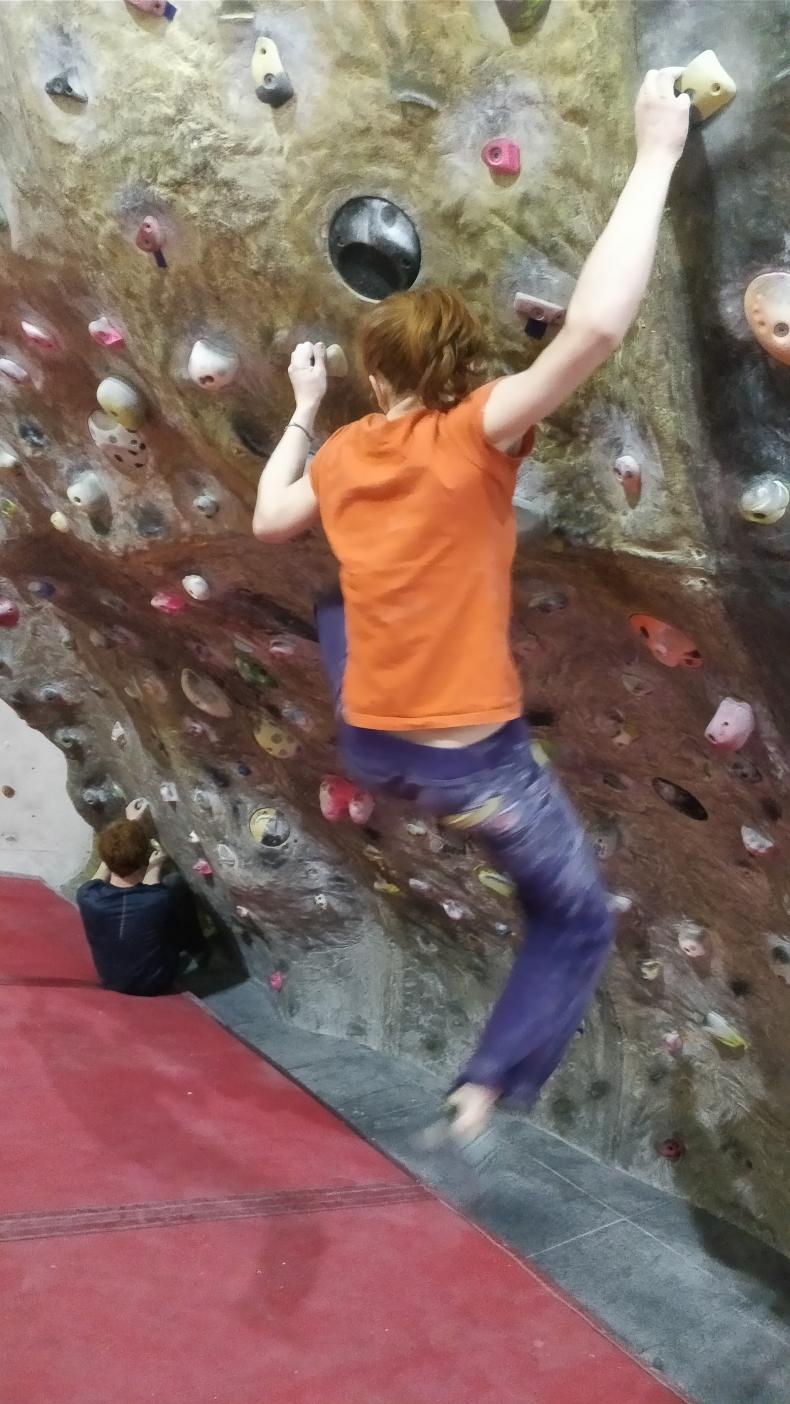 Looking at the rest of my training plan for this week, I have a total of six hours of training left to complete. One of those is a finger board session, three are hard bouldering sessions and there is also a campus session. Really, that is something I would have split into three sessions. But there’s no way I can boulder hard… twice… in a day without splitting the session.

Theoretically, putting a few hours between sessions so you can fit two shorter sessions is a nice idea and would allow for a bit of recovery. In reality it doesn’t fit in with a day of work. Even if you can be totally flexible (and don’t rely on lab hours or meeting people), it’s less time efficient because you have to travel twice and warm-up time twice.

Six hours isn’t that much for two sessions in theory, but it doesn’t allow for resting between sessions or warming up, so it’s likely that it would take me more like eight.

In any case, since the reason I’m behind is that my finger was too sore to train on Tuesday, it would be pretty imprudent to try to catch up. Based on that, I started with a finger boarding session followed by bouldering projects tonight, and that way I’ll only miss one projecting session this week.

I finished by stretching, both upper and lower body, of course, after a climbing session loosening shoulders and forearms is a good idea, but I’ve noticed some good flexibility gains by stretching lower body too.

Friday for me can go one of two ways. Either there’s a feeling of triumph that I’ve made it to the end of the week and the evening has that glorious feeling of the weekend stretching out, or, we have weekend plans that involve packing and leaving Sheffield and it’s the classic panic.

Saturday brought the final training day of the week. It involved a combination of campusing, bouldering and board climbing. I’ve found myself really getting back in to moving dynamically. I think my biggest asset in climbing is my perverse nature. Being bad at something is like a red rag to a bull and although my strength lies in crimping small holds, I absolutely love getting shut down.

There are disadvantages to this. If you do it all the time, it’s bad for self-esteem, and it’s hard to tick your highest grade in a style you're less good at, but I really think it gives me the best gains. 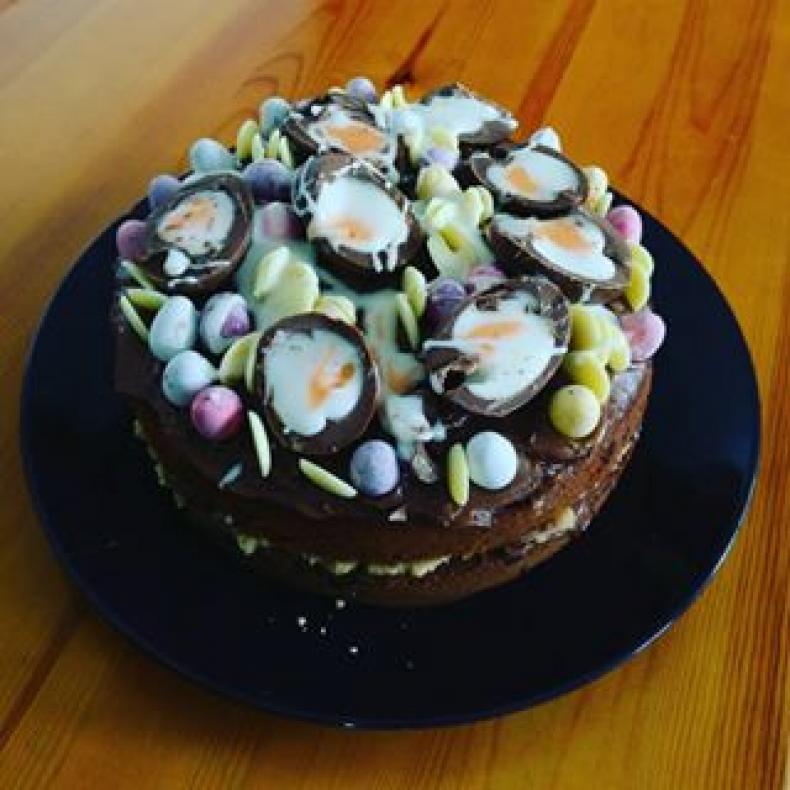 Sunday, the day of rest. Or, if we’re in Sheffield, the day of preparation for the next week. Generally at the weekend I try and slow cook or batch cook as much as possible to prevent us from cooking pasta every night. Cooking in advance is the closest I can get to making enough time to sleep. I also really hate waiting for food after training.

We met my little sister for breakfast, which turned into a cake-fest, but I did add a banana as a token gesture.

We’d considered going out but the weather was a bit… uninspiring. Instead I slow-cooked curry and pulled pork and then prepared lunch for the whole of next week. I tend to find I’m a bit all or nothing here: either I succeed at being a domestic goddess or I completely fail to prepare for the coming week. 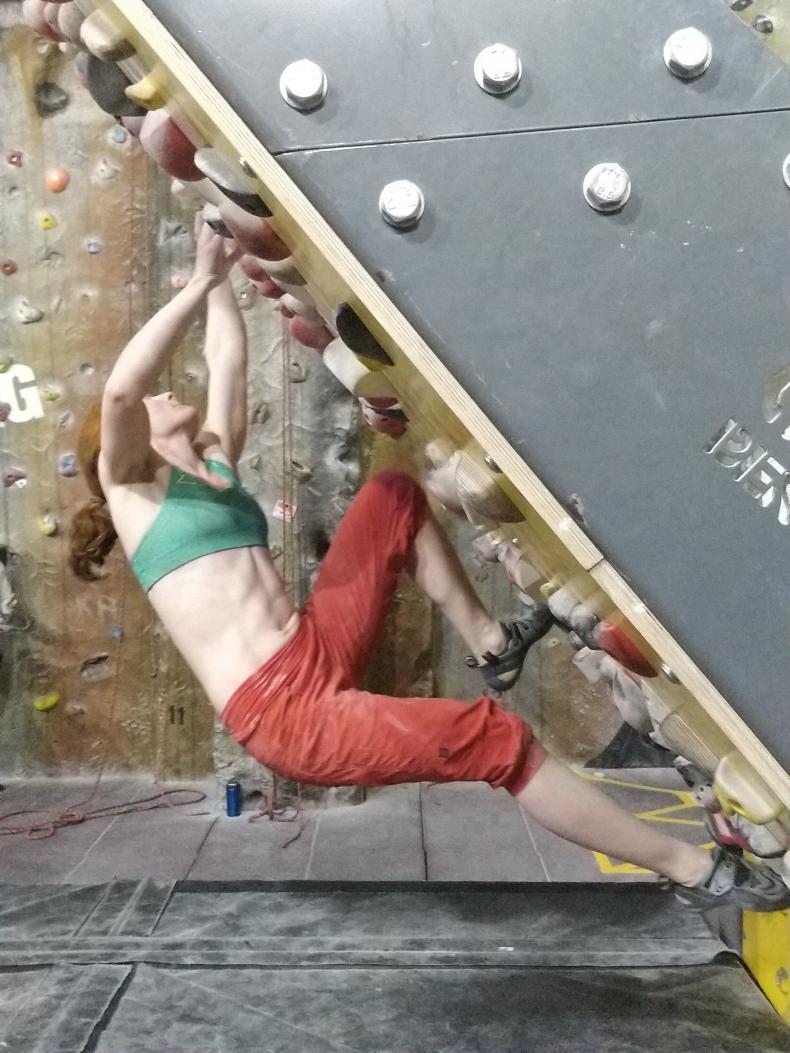 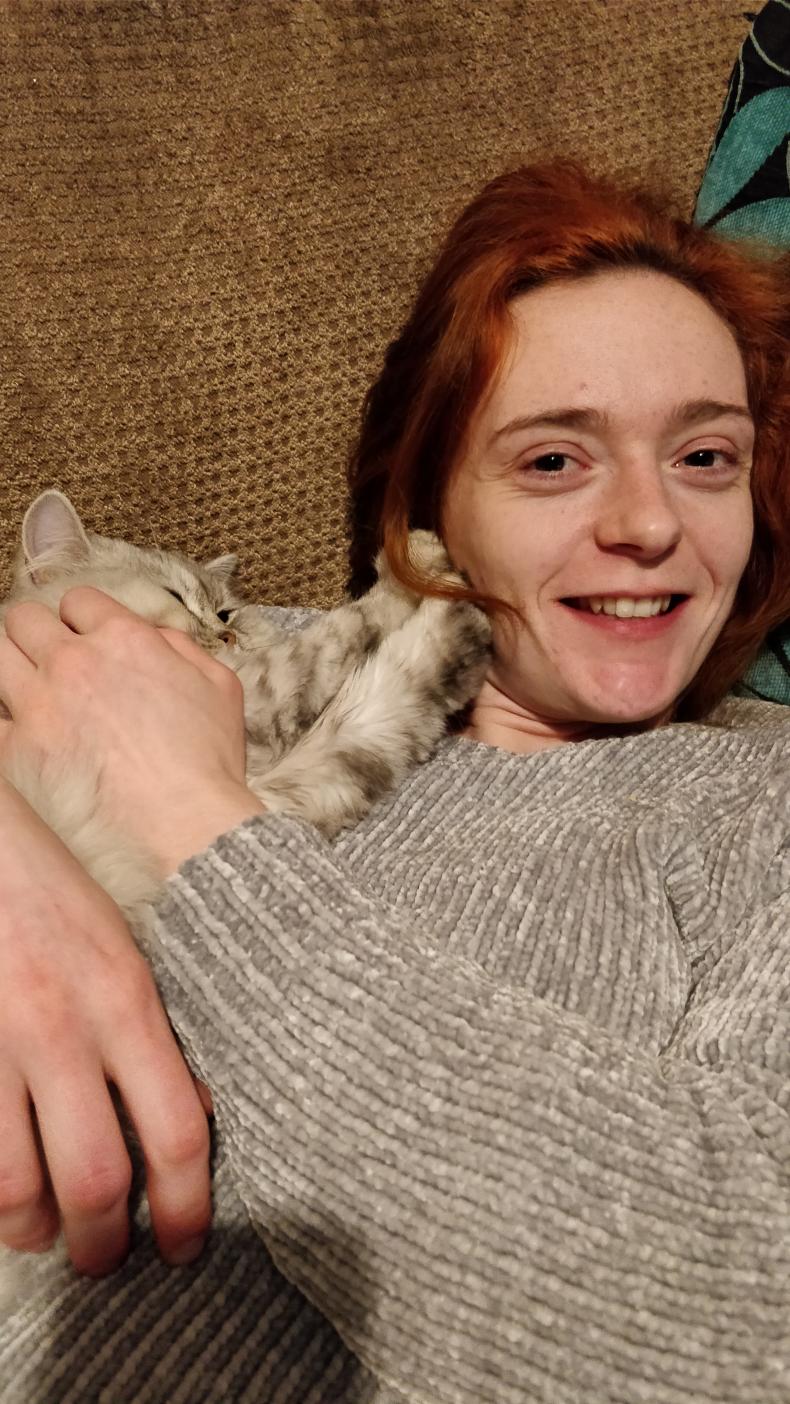 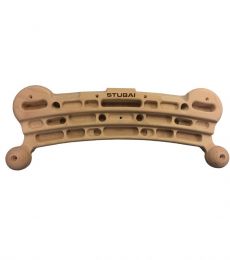