Every year the Arc’teryx Alpine Academy rolls into Chamonix bringing with it masterclasses taught by athletes and guides. From high altitude mountaineering to rock climbing and photography, the academy teaches skills to survive and thrive in the mountains. With so many options available a challenge was born, how many clinics could Climbing Daily visit in a day?

‘I wanted to test our relationship’ Hugo EpicTV’s head of content said. ‘Spending the day running around the valley with Matt was going to pull us together.’

I was less convinced, I mean I really don’t like walking and Hugo wanted to do a lot of walking.

I’m fairly sure using the drone up there is illegal

We met horribly early at the Aiguille Du Midi cable car and started the ride to 3,800m to begin the challenge. As usual the views walking down the legendary, and airy Midi Arete are incredible. Totally worth the early morning. 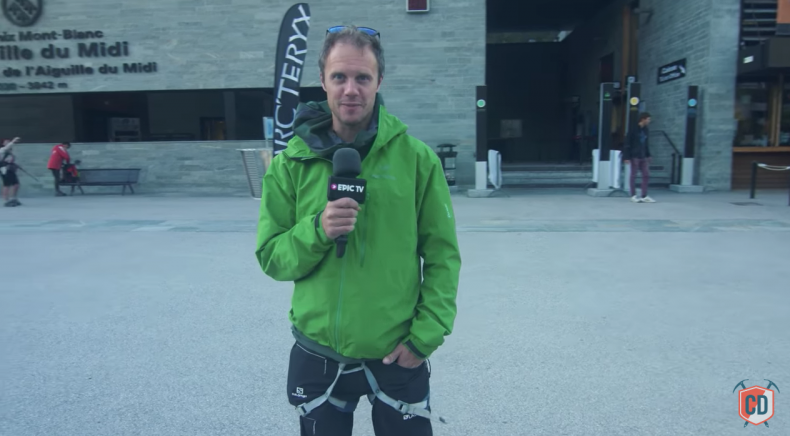 Reaching the bottom Hugo pulled the drone out of his bags and powered it up. Now I’m fairly sure using the drone up there is illegal. So I was a little bit nervous as it rose into the air. As if on que a helicopter appeared and hovered above us. The day could be over already.

I pretended to be admiring the view while Hugo swooped the drone down low and hid behind a rise. Luckily the helicopter went on it’s way and we retreated back up the ride. Worth it for the shot. 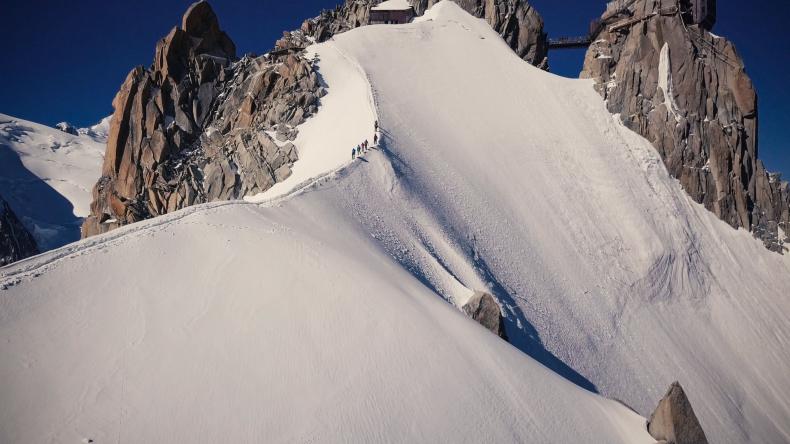 ‘That was scary’ Hugo said hiding the drone in his coat, ‘I’ve never flown it that high before’. Words to fill you with confidence.

On the lift down I had been trying to sport the aid climbers who were meant to be somewhere near the Arete des Papillons, but instead saw a group of academy photographers. We jogged over in full gear, ice axes over our shoulders. A bit out of breath, and a little sweaty I grabbed a tip from Dave the leader. A quick run back to the lift and then the plummet back down  the lift to Chamonix. 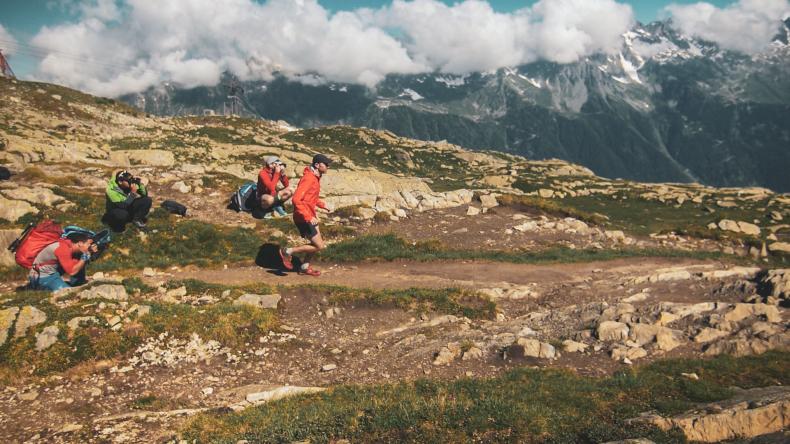 At this point I was hungry. A serious problem.

Stopping at the bakery for supplies we headed back to the car and contemplated our next move. We decided on Gaillands, as quite a few clinics were taking place there. Our gamble paid off and we grabbed two more tips, one from a muscled man high up on the wall teaching aiding techniques, and one from the sport climbing group. 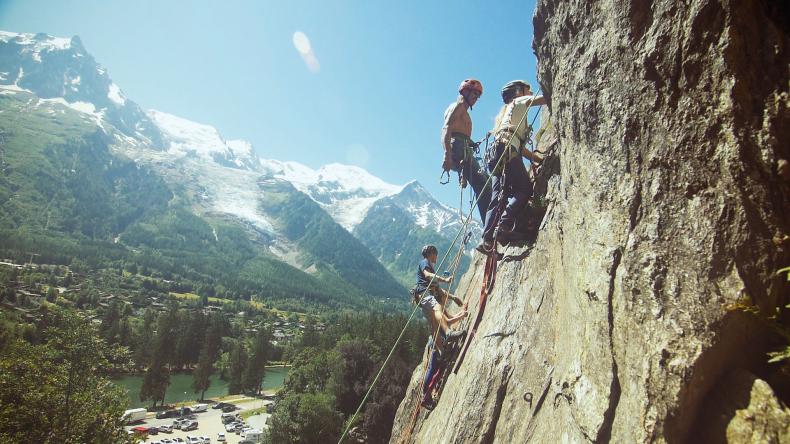 I was very keen to head up to the Col de Montets as I knew the bouldering clinic was up there…and to be honest I wanted a climb. The group was being taught by Katy Whittaker and Mina Leslie Wujastyk, two climbers I really admire so tips from them would be great. 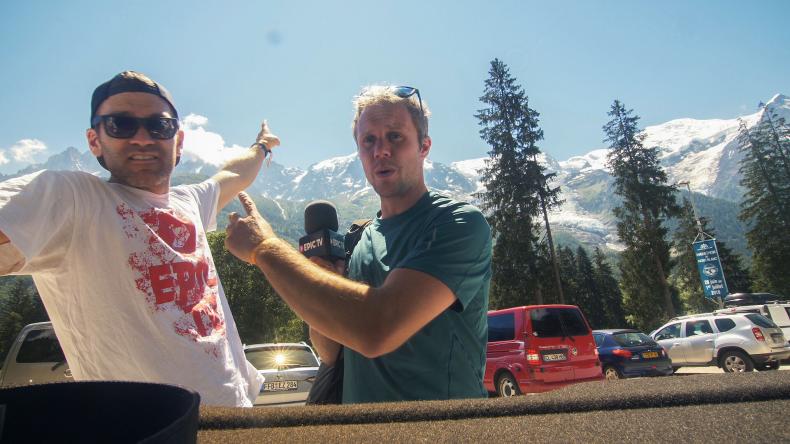 I felt like I had to take charge of the situation, the moment Matt had his top off and started climbing I knew mentally he was gone.

We drove 30 minutes up the valley and walked into the clearing where the boulders are to be greeted by…nothing.

No climbers to be seen apart from an abandoned hat and pair of flip flops.  This was a problem. We had committed to coming up there, and the nearest clinic was at least another 30 minute drive away.

I dealt with the problem by going climbing. Hugo was more practical and phoned Seb, the head guide; ‘I felt like I had to take charge of the situation, the moment Matt had his top off and started climbing I knew mentally he was gone’

We faffed around for ten minutes waiting for the organisers to call back. I climbed to the top of a big boulder and, embarrassingly, spotted the clinic about 20 meters away from us. Woops. 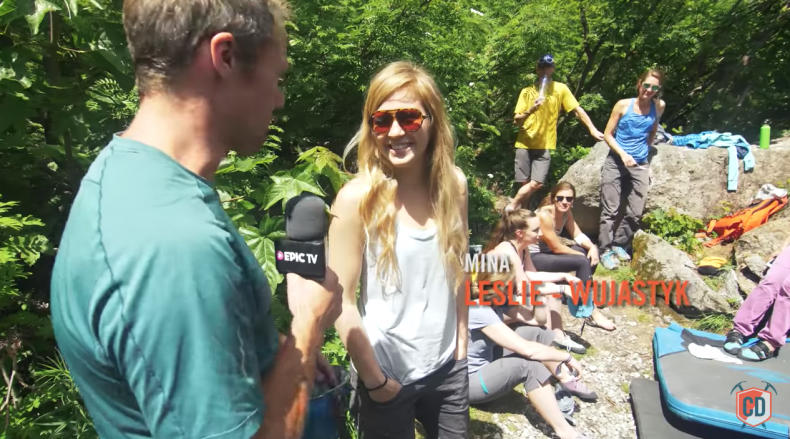 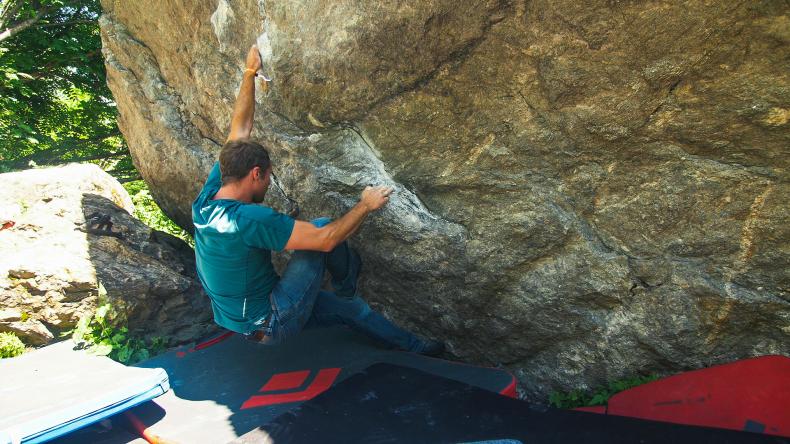 Pretending nothing had happened we walked over and picked up a bouldering tip. So with five done, I was happy to chill and climb. Hugo had other ideas.

I had stupidly mentioned that the organiser had mentioned a trad climbing group might be above Bosson in Chamonix, at a crag high up the hillside. For some, bizarre and unknown reason Hugo wanted to go there.

‘It’s a challenge’ Hugo insisted. ‘It’s not meant to be easy.’

My argument was that it was a 50 minute walk straight up a hill, there was 1.5 hours left of the day, it was a 30 minute drive away and we had no gurantee anyone would be there. However, Hugo is the boss so we went. I was not happy. 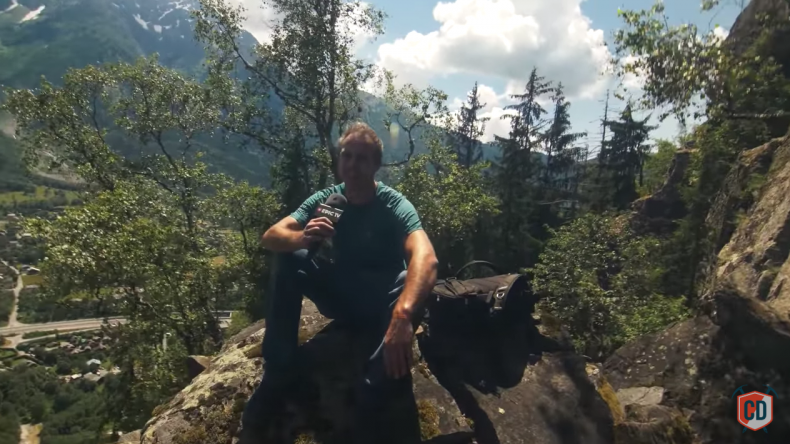 One sweaty, steep, muddy, utterly pointless walk later, we found the completely deserted crag. Even Hugo lost his psyche at that point. I suggested we got a helicopter down, but we settled on walking and dragged ourselves back down the hill.

We returned to the Alpine Village still needing one more tip to finish the film. Luckily Andy Perkins was on had and imparted some racking up advice. It’s all about gear organisation apparently.

So we were finished and with a beer in hand we watched the final clinics returning to Chamonix. It had been a big day, Mountaneering, photography, sport climbing, aid climbing, bouldering and a stupid walk. Not a bad day’s work really. 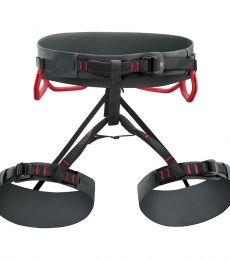 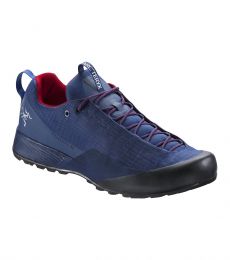