What Are Sport, Trad, and Alpine Climbing Quickdraws?

Quickdraws are simple bits of kit: two carabiners, a dogbone or a sling, and finally, on most but not all, a rubber retainer. But the tricky thing about quickdraws is their variety. Nowadays, most manufacturers offer pre-made sets of quickdraws designed with a specific purpose in mind—i.e., sport, trad, or alpine climbing, or all-round use—and most climbers buy these pre-made sets as they tend to be cheaper than building their own. Still, within these categories there are multiple price options catering for the budget and premium markets, as well as everything in between. (Even a budget set of 12 costs in excess of £100.) So, knowing the desirables of each category will help you choose the best quickdraw for you and your climbing style.

This article breaks down the fundamental aspects of sport, trad, and alpine quickdraws, explaining the desirable features of each. But remember, the primary function of a quickdraw is to reduce rope drag. It’s less pertinent when sport climbing, as sport routes tend to be bolted on the straight and narrow; however, it’s much more of an important factor when trad climbing. If you’re unsure of how this works, here’s a link to a really useful article on rope drag and extending placements: 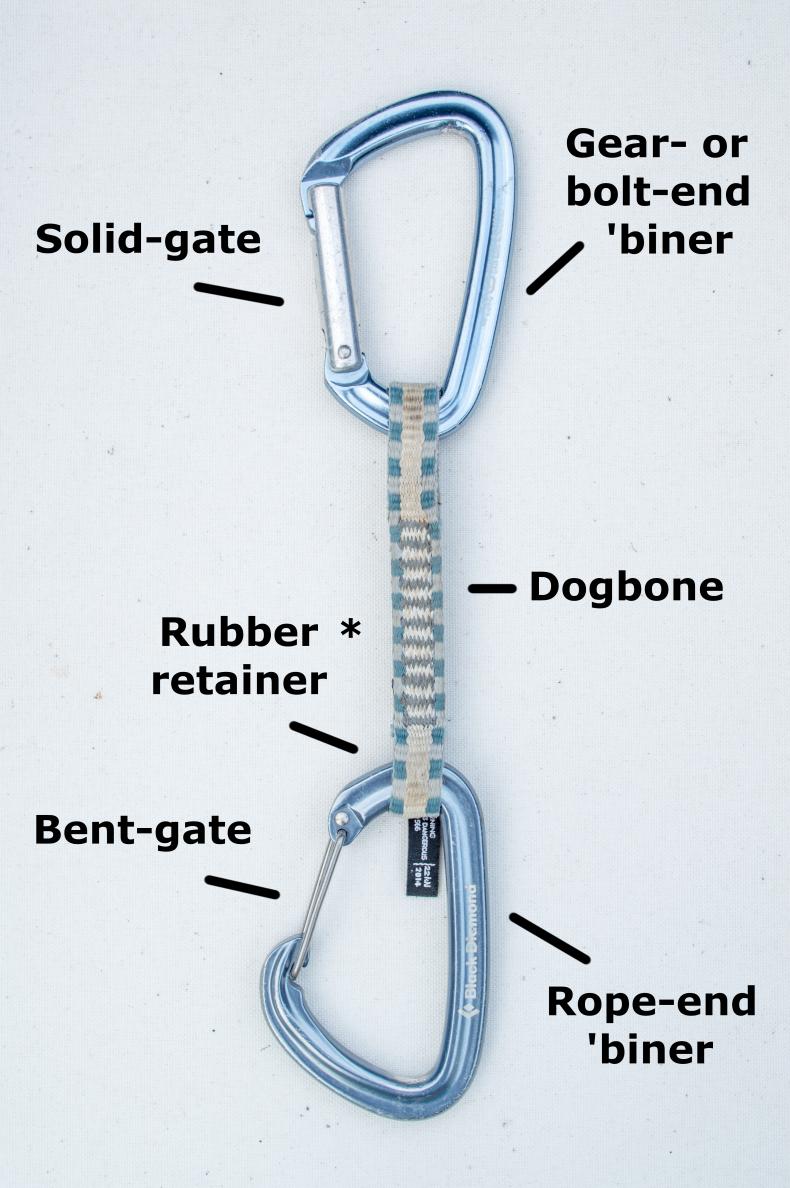 Sport climbing, at its core, means hard climbing, so smooth clipping and unclipping, being easy to pull up on when working hard sections, and being very durable so as to survive the abuse of repeated falls are all essential features of the sport ‘draw.

Larger carabiners offer a number of advantages in terms of functionality and durability: they have larger gate openings making them easier to clip the rope into; they’re more durable to their larger mass; and they’re easier to handle in general just because they’re bigger.

Wire-gate carabiners have a notch where the gate sits when closed, and which snags on bolts and on the rope. At best, snagging is inconvenient. At worst, it’s highly frustrating and can make cleaning certain routes, like overhanging routes where you really have to pull on the draw to unclip it, very hard work. Solid-gate carabiners have a keylock nose—i.e., no snagging notch. 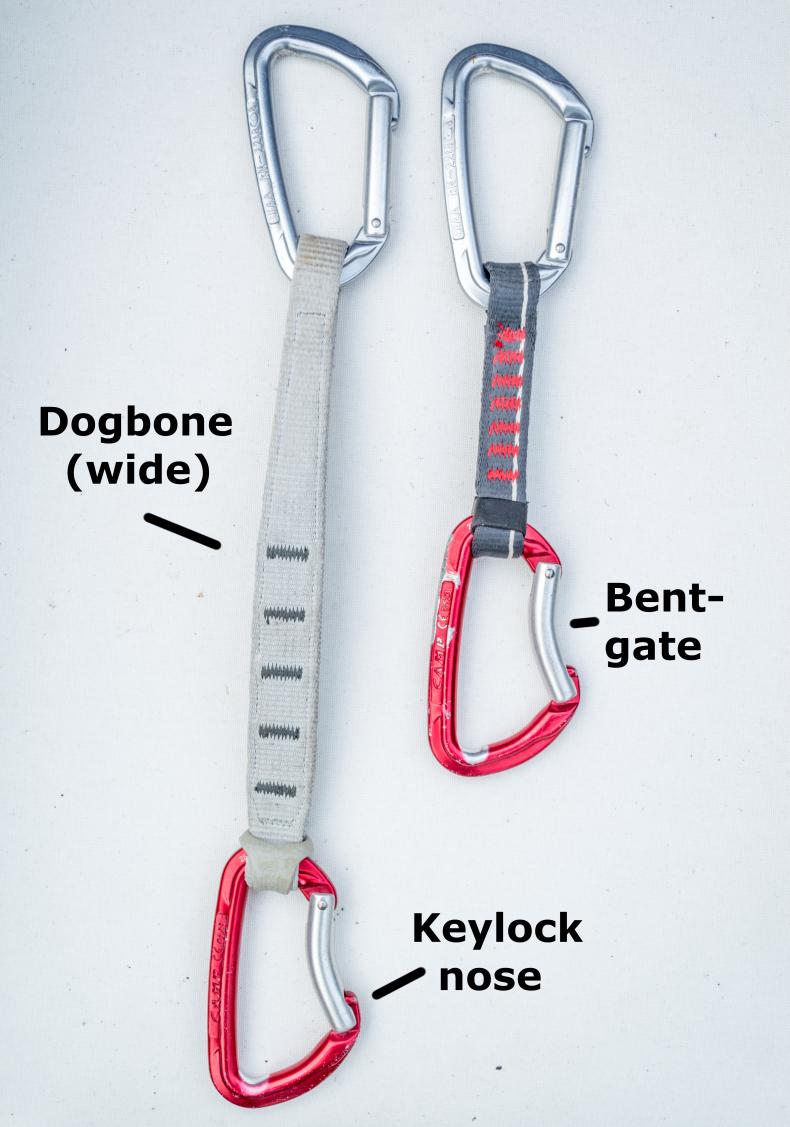 When working hard sections of a route, you’re going to have to pull a lot on the top quickdraw in order to gain as much height as possible. A wider dogbone is easier to grab, therefore making this part of the projecting process easier.

A pleasant side effect of a wider dogbone is that it makes the whole quickdraw stiffer and thus easier to clip. 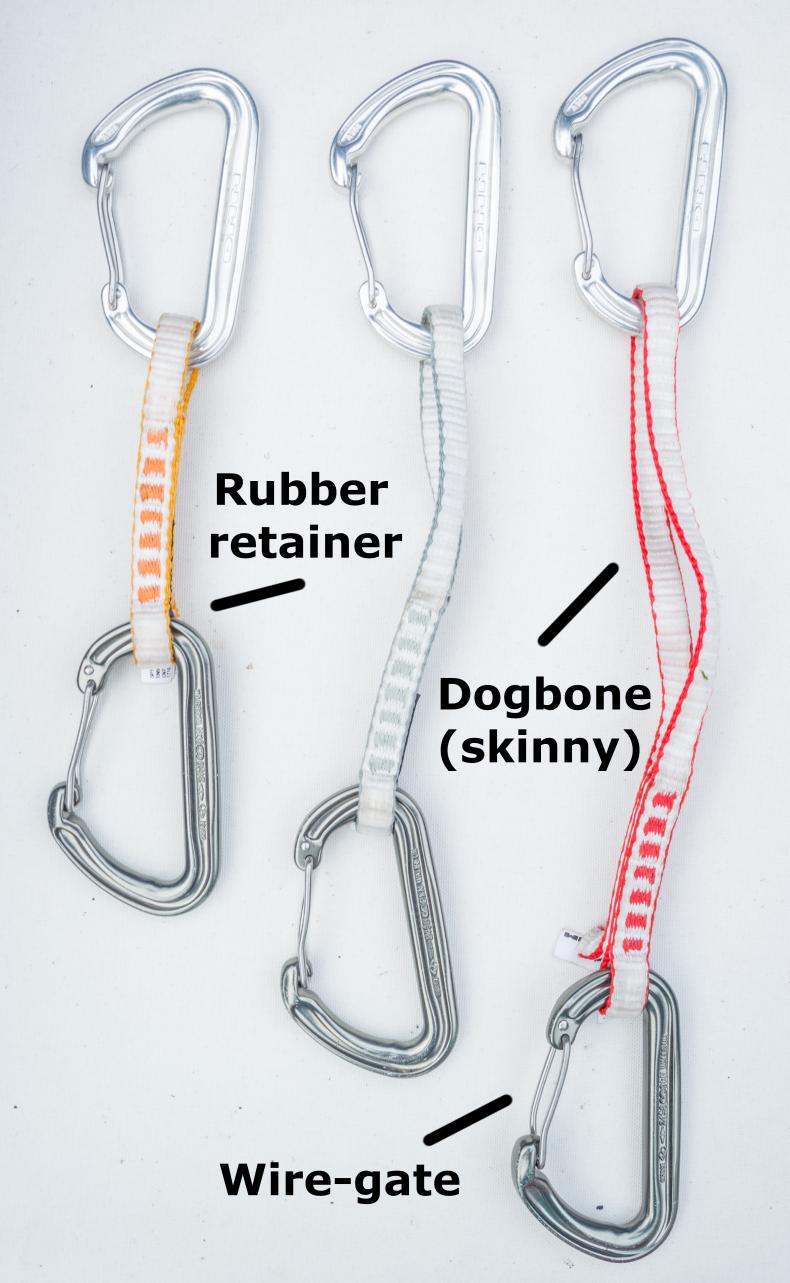 Trad ‘draws strike a balance between the absolute minimal weight of the alpine ‘draw and the functionality and durability of the sport ‘draw. Trad ‘draws need to be lighter so as to save weight on your harness, which all of your other trad climbing gear will be racked on, yet still functional and durable to make the climb easier and safer.

Around 85% of a quickdraw’s weight comes from its two carabiners. Choosing smaller, lighter carabiners will help you keep weight to a minimum when choosing or building trad ‘draws; however, that means a compromise of handling and clipping performance, although the latter is partially offset by the smaller diameter of half ropes.

Wire-gates are much lighter and more reliable than solid-gates, and they don’t freeze up in winter conditions like solid-gates do. Their only disadvantage is their lack of a keylock nose; however, some manufacturers are coming up with solutions to this problem:

It is possible to have both a wire-gate and a snag-free keylock nose. Three examples of this are DMM’s Alpha Trad carabiner, Black Diamond’s HoodWire technology, and Petzl’s Ange Finesse carabiner, all of which feature clean, snag-free noses. They are, however, more expensive than your standard wire-gate option. 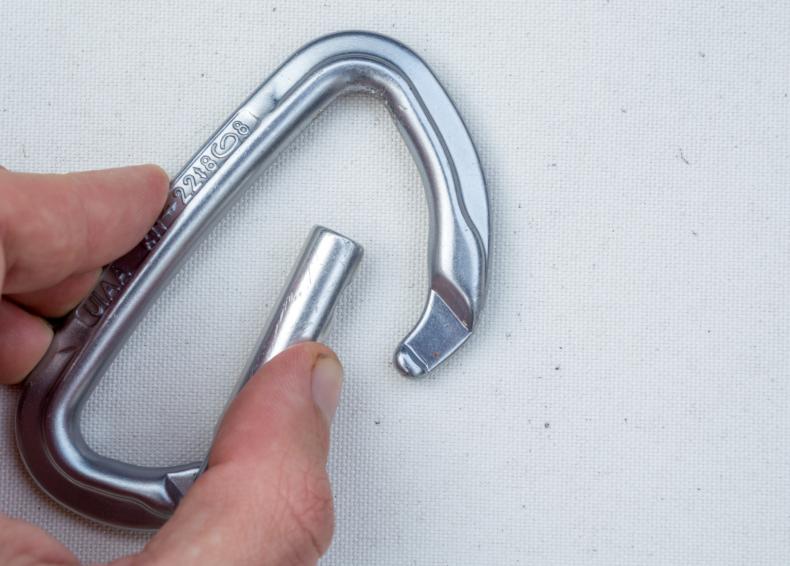 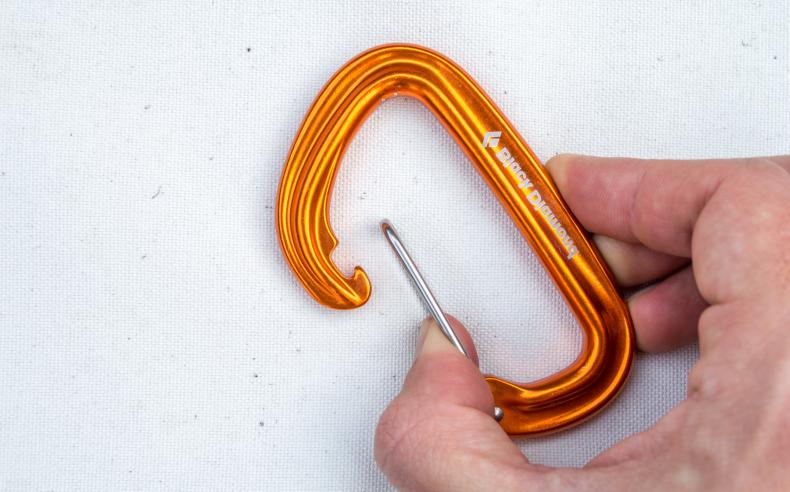 Gate flutter occurs when the vibrations of a climbing fall cause the gate of the loaded carabiner to ‘flutter’ open. This is a bad thing: a carabiner’s open-gate strength is only one-third of its closed-gate strength. Due to their lower mass, wire-gates are less likely to flutter during a fall than solid-gates are.

The UIAA state that a real climbing fall exerts a maximum force of 5 kN upon carabiners. They also state that 5 kN isn’t enough force to create vibrations that will cause gate flutter. Although, this doesn’t mean that you shouldn’t choose wire-gates for this reason: there’s still a chance that the gate may open due to impact against the rock, inertia, and vibrations in the rope. More research and experimentation needs to be done around this subject, but for now it is best to err on the side of caution and assume that wire-gates do reduce the chance of gate flutter. 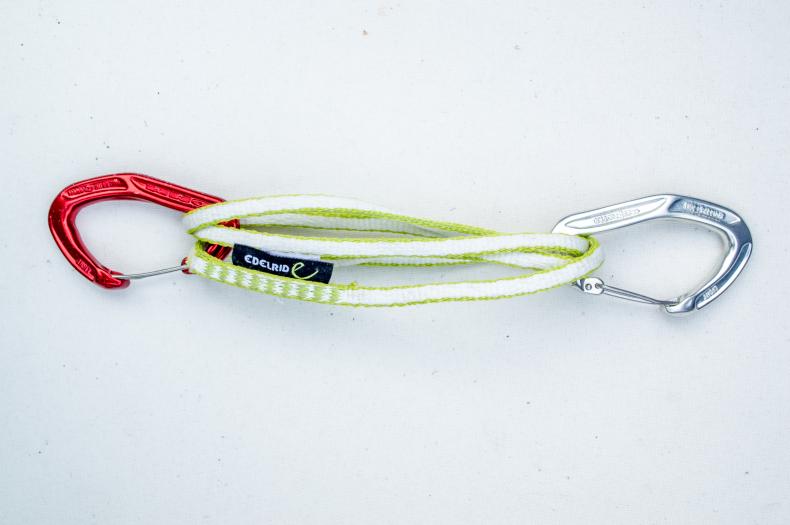 In a test comparing the strength of new and old climbing gear, Black Diamond found that their 10 mm Dynex and 18 mm nylon slings both broke during the abrasion portion of their test, whereas their 10 and 14 mm Dynex dogbones both survived the set 500 cycles. Black Diamond wrote: ‘This is possibly due to the fact that the webbing was more likely to twist and turn and be cut on an edge instead of having the stiffness of a dogbone, which forces the abrasion to be consistently across the width.’

Real climbing situations often produce very different results to tests done in a controlled setting, but nevertheless the results of Black Diamond’s should be considered when buying and inspecting alpine quickdraws.

One significant difference between alpine ‘draws and other quickdraws is the lack of a rubber retainer on the rope-end ‘biner. This means that the rope-end ‘biner can move freely on the sling, making it harder to clip and increasing the chance of it becoming cross-loaded—i.e., loaded on its minor axis. Like an open-gate, cross-loading reduces the ‘biners strength by two-thirds.

When climbing with alpine ‘draws, always ensure that the rope-end ‘biner is correctly loaded before ascending. You can reduce the chance of it becoming cross-loaded by purchasing a carabiner or carabiners which encourages major axis loading via a deep rope basket, like the DMM Alpha Trad.

All-round quickdraws tend to be designed with a wire-gate ‘biner on the bottom (durable and lightweight), a solid-gate ‘biner on the top (keylock nose), and a medium-width dogbone (pull-able but not too bulky). This combination can be used for both trad and sport climbing, and it balances performance with affordability.

One solution is Edelrid’s Bulletproof carabiners. Bulletproof carabiners utilise a steel insert where the rope runs, increasing the lifespan of the ‘biner—and, as the UIAA found, your rope—whilst only adding minimal weight. The downside to this solution is that Bulletproof quickdraws are expensive, costing up to three times more than your bog-standard option. My advice: buy two or three Bulletproof quickdraws for any top-roping and lowering off you may do, as well as for use on the sections of your project where you’re going to be doing a lot of falling.

https://www.theuiaa.org/documents/safety/How_strong_are_your_karabiners.pdf – put this hyperlink in where it says ‘the uiaa found’ 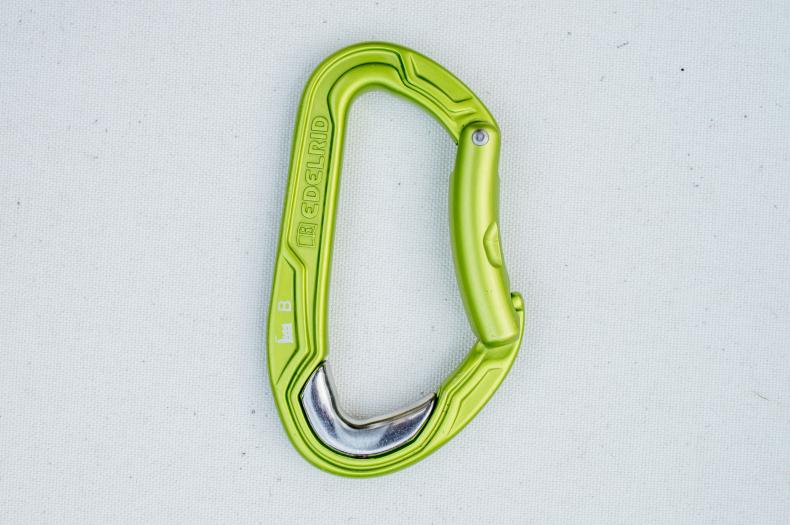 The first quickdraw on a sport route is subject to far more wear than all the other quickdraws in the system. This is because the point at which the rope passes through the first quickdraw creates the smallest, sharpest bend in the rope, thereby producing the greatest amount of friction, wear, and rope drag.

To prevent premature wear of your carabiners, use a 25 cm quickdraw on the first bolt of any sport route to increase the angle of the rope and reduce friction, or, use a Bulletproof or steel carabiner. You can even do both if you’re really feeling in the mood for preservation.

The Best Jacket I Never Knew I Needed….
4K
8 min read
Next article 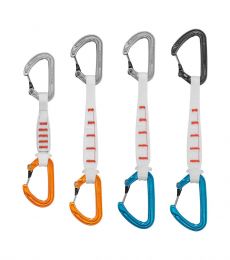 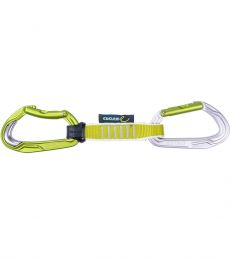 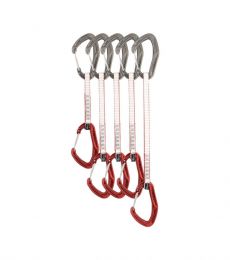 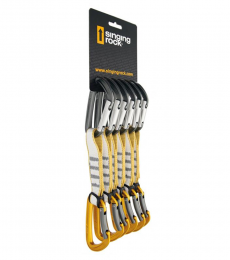